In 1371 a Carthusian monastery was founded on what is now the north side of the square. It was established near a 1348 plague pit, which formed the largest mass grave in London during the Black Death, and tens of thousands of bodies were buried there. The name of the monastery, Charterhouse, was derived as an Anglicisation of La Grande Chartreuse, whose order founded the monastery. The Charterhouse was dissolved as a monastery in 1537. It re-opened as an almshouse in 1614, supporting 80 pensioners (known as ‘brothers’).

Florin Court, a residential building in the Art Deco style, is located on the eastern side of the square. The building has a distinctive curved façade and was used as the fictional residence of Hercule Poirot, Whitehaven Mansions, in the 1980s TV series Agatha Christie’s Poirot.

The independent preparatory Charterhouse Square School is on the south side of the square. Smithfield Market is to the south-west along Charterhouse Street.

“We carefully removed the vehicular gates along with both of the piers from the square and transported them back to our workshop were we gently blast cleaned them in a controlled environment to remove all of the old paints and corrosion in order to provide a suitable medium for successive coats of a new paint system. The gate frames and piers had suffered from vehicle impact damage in the past and so we straightened them. we also repaired fractures and breaks to the cast iron lamp structures and infills at the top of each pier. All interstices were sealed by hand with a polyurethane adhesive sealer, paying particular attention to areas that could trap water. In these areas the sealer was shaped by hand to enable the water to run off effectively. Successive hand applied paint layers were then applied using our high specification paint system, before the restored gates and piers were transported back to site and re-installed by our own installation team.” 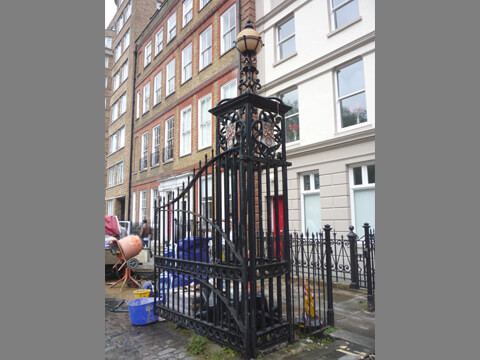 One half of the wrought iron gates awaiting restoration. 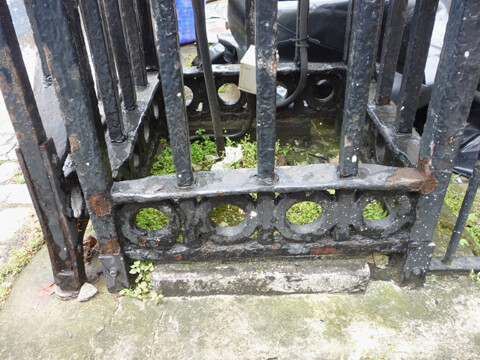 The gates had been struck by vehicles, leaving the gate frames bent the piers broken in several places. Poor quality repairs had been attempted in the past and the gates were also suffering from corrosion. 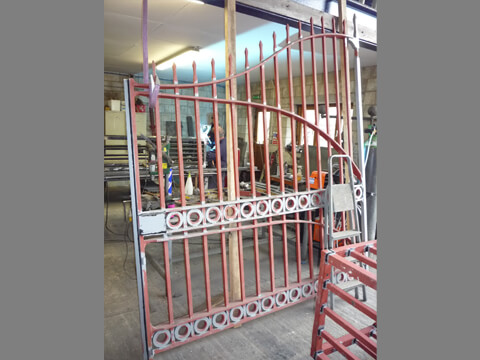 We replaced all broken ironwork and gently blast cleaned all components to remove all of the old paints and corrosion in order to provide a suitable medium for successive coats of a new paint system. 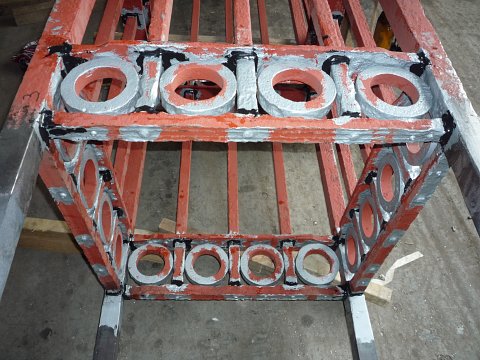 All interstices were sealed by hand with a polyurethane adhesive sealer. 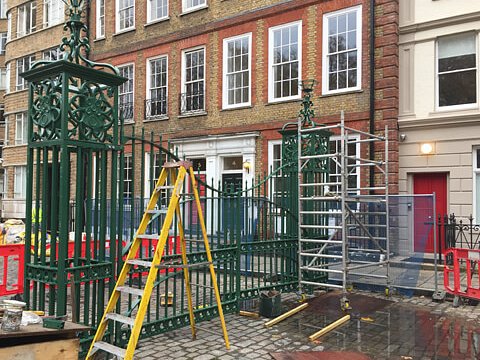 The restored gates were returned to site and installed during an organised road closure. 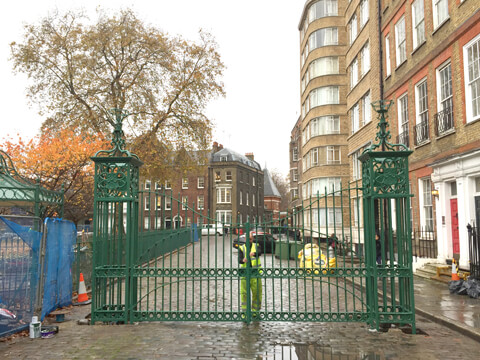 The gates were carefully levelled and aligned to ensure correct and safe operation.