As part of Manchester Cathedrals extensive restoration project, we were approached to restore the quire balustrades, gates, overthrows and altar rails.

The decorative wrought ironwork was originally made by Staffordshire born ironsmith Robert Bakewell (1682-1752). Manchester Cathedral was just one of his ecclesiastical projects. Similar can be found in Derby Cathedral and many other churches around the Derbyshire area.

Over the years, much of the low level decorations have been damaged, lost or repaired. Originally these were pressed wrought iron plates, but many were found to have been replaced with poor copies in lead.

Numerous coats of paint over the years have resulted in much of the definition being lost from the details.

It was agreed with the Cathedral Architect to carefully remove the lower level panels to our workshops, survey and remove originals delicate details for restoration and replication.

The iron panels were then gently blast cleaned to remove the old paints and any corrosion to provide a suitable medium for successive coats of a new paint system. The delicate floral details were chemically stripped separately.

Bronze was chosen by the Cathedral team for the background colour with widespread gilding used to pick out floral details.

Missing floral details were replicated where required using originals as samples and the full set then re-fixed to the repaired painted balustrades.

A large missing section of iron balustrade was made to replicate exactly the originals to ensure that the balustrades match throughout the Cathedral.

The upper level overthrows and large gates, being out of reach over, were in good condition and largely complete. These were carefully restored in-situ.

All of the metalwork was the finish painted in bronze and features gilded in 23.5 carat gold leaf to provide contrast. 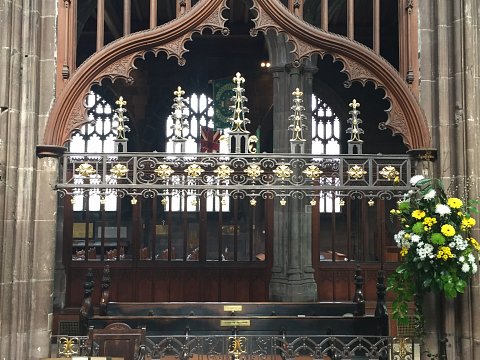 The new railing panel made using the originals as a template. This new panel replaces a modern panel that was of different design to the originals. 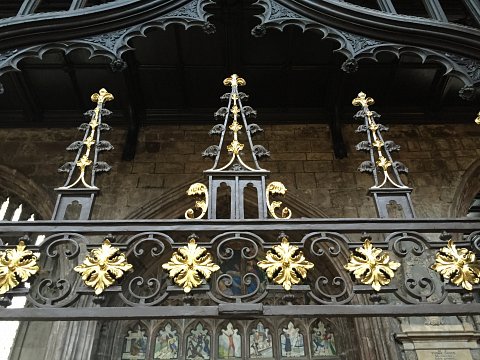 We replaced poor recent repairs found on the gates and overthrows. 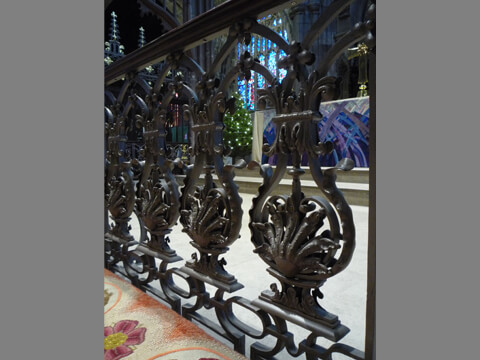 An example of the sharp crisp details in the ironwork revealed after the paint layers were lifted. 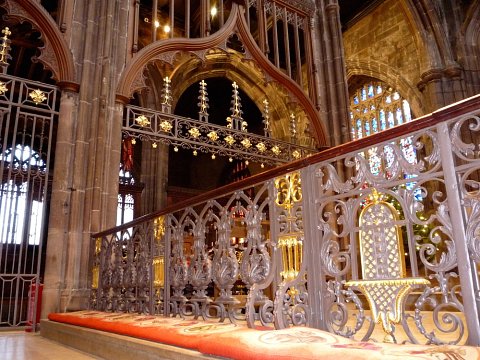 The altar rail and one of its overthrows had many broken decorations. New decorations were cast to replicate the iron originals. 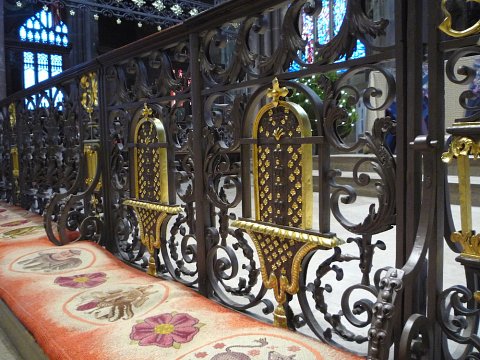 All of the gilding work was undertaken by our friends at Eskdale Restoration.