Macclesfield is a market town, located in North East Cheshire, with a large number of high-quality 17th century to 19th century listed buildings.

St Michaels and All Saints Church resides on top of Treacle Hill adjacent to the Town Hall and has its origins dating back to the 13th century. Over the years it has has been remodelled extensively before being awarded Grade II* listed status in 1949.

The churchyard boundary originates from the 19th Century. It consists of a sandstone ashlar wall surmounted by cast-iron spearhead railings with wrought iron horizontal rails, supported on urn-capped posts. The wall along the West boundary is subject to subsidence from the tree roots in the Church’s grounds. It was decided to reinforce the wall with structural buttresses, dressed with matching stone leaving the original line and as such the repaired railings still lean in a little. The palings were originally set within leaded sockets; but many had corroded and expanded, cracking the coping stones along the central line, breaking many in half. In recent years, the stone coping had been covered with a temporary concrete capping to retain the integrity of the stone beneath.

Four trees on the West boundary of the churchyard were removed prior to the works to halt further movement of the wall. The railing panels were carefully surveyed, tagged and removed to our workshop for repair and modification. The railing posts were found to be in good condition and so were restored in-situ to minimise disruption to the stonework. The railing panels were sliced off at stone level and the iron stubs core drilled out and made good by a stone mason.

Consents were granted to modify the railings, introducing a new lower horizontal rail to panels to negate the need for them to fit within the wall. This allowed the original coping stones to be repaired and reused rather than replaced. 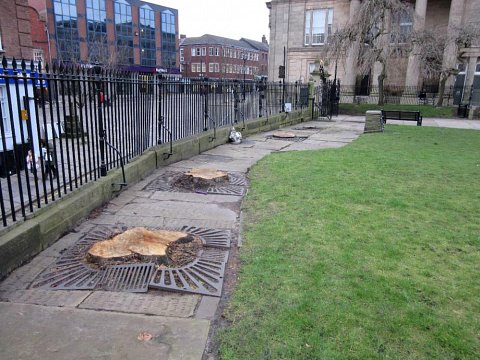 Four trees were removed prior to the works to stop continued root damage to the new repairs. 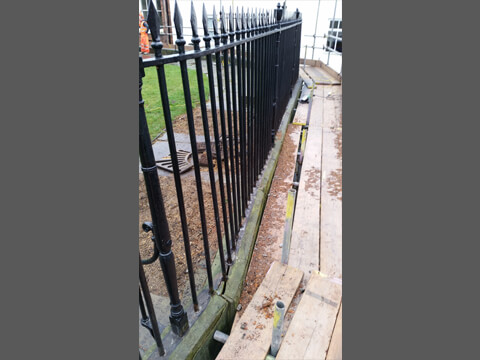 The ends of the railings had corroded and expanded allowing water to ingress within the stones which had lead to corrosion.

The stone coping had been covered with a temporary concrete capping in the recent past, but this had allowed corrosion to continue out of sight and cause further damage. 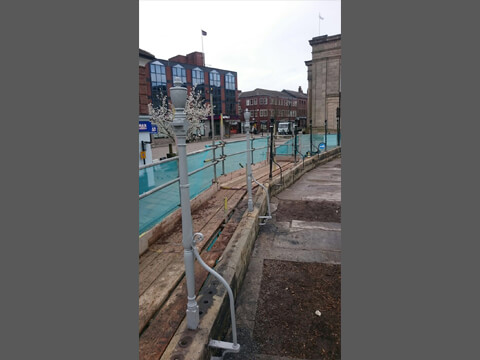 The cast iron railing posts were in good condition generally and it was decided to restore these in-situ, acting as a datum for the installation of the repaired railing panels. We restored the forged iron scrolled end panel to its former glory. 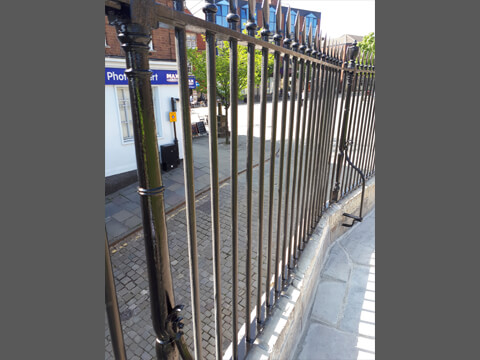 As part of our restoration works to the railing panels we were asked to incorporate a replacement horizontal base rail allowing the copings to be re used. 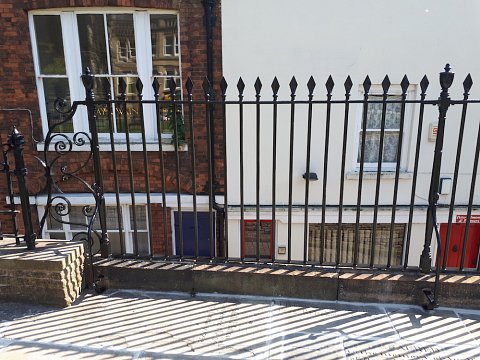